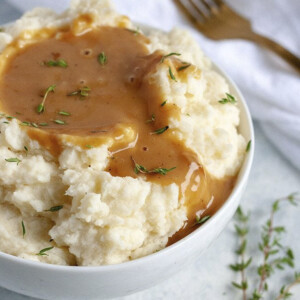 Growing up, mashed potatoes were a very important part of Thanksgiving dinner. In my mind, they were the main event (I wasn’t into turkey, even back then). My dad was the cook in our house, and his mashed potatoes were unbeatable. Smooth, creamy, and fluffy, I’d refill my plate until I was so full of potatoes I couldn’t move.

Naturally, I called my dad for advice on making the perfect mashed potatoes this year. That’s what dads are for, right? It turns the “secret” to his magical mashed potatoes was nothing more than using milk and butter. Well, that’s not going to work for us. So I set out to create a vegan mashed potato recipe that’s just as creamy and decadent as the stuff I ate as a kid.

It all starts with using the right kind of potato. A lot of folks use Russet potatoes, but I’ve found that Yukon gold potatoes are the key to amazingly fluffy mashed potatoes. Plus, they have a natural buttery taste that makes them perfect for our purposes. Just peel, quarter, and plop your potatoes in a stockpot (or your Instant Pot!) and boil until a knife effortlessly glides through.

If the idea of using two heads of garlic in your mashed potatoes sounds extreme, trust me. It’s not! When roasted, the pungent flavor of garlic mellows out a lot. I’ve been known to eat roasted garlic as a snack. It adds wonderful depth to these vegan mashed potatoes and pairs so nicely with the truffle oil. You can find truffle oil in any major grocery store; it should be next to the olive oil (white and black truffle oil can be used interchangeably).

Because stovetop space is at a premium on Thanksgiving, we decided to offer an Instant Pot version of these vegan mashed potatoes as well. No matter how you make them, these are going to be a smash hit at your dinner table this year! Eat them on their own or serve with a side of our Herbed Mushroom Gravy.

Roasted garlic adds wonderful depth to these vegan mashed potatoes and pairs so nicely with the truffle oil. Make them the traditional way or bust out your Instant Pot to free up stovetop space.

To make these vegan mashed potatoes in your Instant Pot, peel the potatoes and slice them into quarters. Put the potatoes in the Instant Pot and cover with an inch of water. Add a dash of salt. Cook on the steam setting for 12 minutes. Release the steam right away and drain. Follow the remainder of the recipe as written.